Fatties on the River 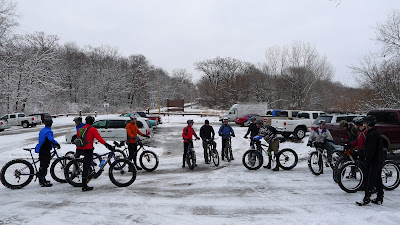 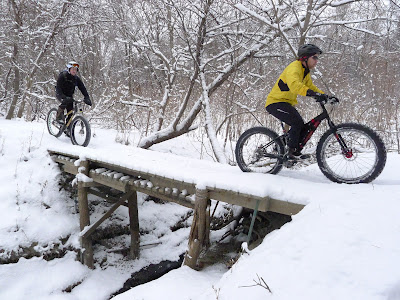 Wasting time on the confuser one day I saw a post  on the MORC forums announcing a fat bike ride on the river bottoms. I decided to check it out. I got there late and had to bust ass to catch them, a few miles down trail were 7or 8 fatties cruising along. I joined in and had a good time. We went about ten miles out, took a break and headed back. The real fun started when the snow began to fall, it changed the dull gray sky and cold brown dirt to a winter wonderland. If you ride or do anything out side this time of year (transition) you know what I mean.

A couple weeks later I was back down for another installment. This time we had real snow; around four inches of fluff. Although we did not have "first tracks" the trail and woods were awesome. The group got quite a bit larger almost doubling at 15 riders. We made our way to the turn around in a little under two hours, stopping a couple times to piss and  watch each other navigate a tricky creek crossing . I decided to bid farewell and ride on a little farther. A little farther turned out to be about three more hours. I ran across a few other friends on the ride and a group on cross bikes messing up the trail and making smart ass comments. I put the screws to them as they tried to hang on my wheel but could not, as they fish tailed back and forth further messing up a well groomed trail.

Safe journeys space fans: where ever you are out there.
Posted by Death Rider at 6:37 PM