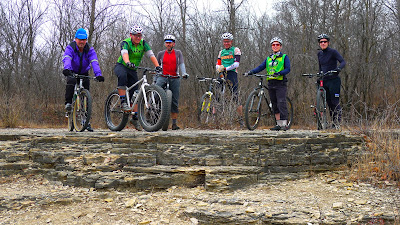 During my many  hours wasted in front of the computer writing and reading blogs, a daily check on my blogroll revealed a group ride taking place at a shop I really wanted to check out for a while now. Milltown Cycles in Fairibault MN. They had everything a person could want or need for a Fat-Bike as well as a bunch of other cool stuff  that you just want. The ride was awesome, since my dad was taking the kids overnight, I actually got to ride with my wife. The terrain was sweet, a mix of two track, renegade trail, and stuff that Native Americans might have walked a hundred years ago. It reminded me of what mountain biking was like when I first started riding a real bike 20 years ago. I don't feel old. The guys on the ride were really cool too, I'm going to try and do some ice climbing with Mike, I also hear he's a famous frame builder. To top off a great ride, Ben  had ham sandwiches, beans and some other food for our delight. The ham was way better than the dried out turkey I had the day before. Thanks Ben and thanks Curtis for a fun ride.

I was on a good roll for the long weekend since Wednesday and it continued after the ride when Lynn and I went to the new Vertical Endeavors in Mpls. We lasted about two hours and headed home but not before we chowed down on our favorite after climbing meal, pad thai.