I didn't know it at the time ,but 11 years ago when I threw my leg over the top tube and rolled out on my first Arrowhead 135,(I did 8, finished 6) I was getting ready for a loop around Voyageurs National Park. The Arrowhead comes very close to the park without actually entering it, but the maps included in our race packet showed the entire snowmobile trail loop we recently completed during the last few days of February. 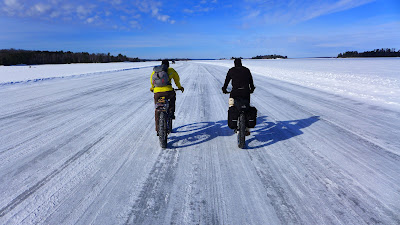 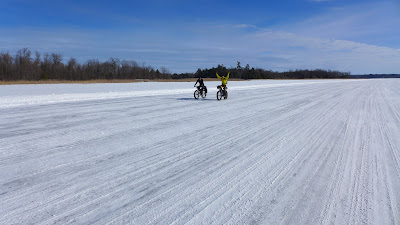 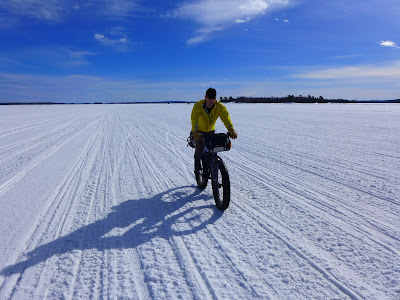 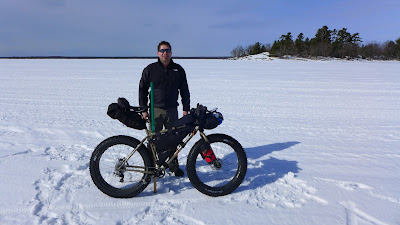 After finishing the race a few times I began looking at the map and imagining a ride out on the remote open lakes. The area can be so brutal in winter it became something I just pushed off, not wanting subject myself to the torture. Skipping a few years of that race has numbed my memory and I, along with my #1 adventure partner, ArcFlash, (AF, Arrowhead finisher 2013) began planning a return trip to explore more of the area. Without a definite route, the plan didn't materialize for over a year, until I started looking at some maps and made a call to the park. The ranger I spoke with was super cool and said the trails don't specifically prohibit bikes and he encouraged us to come up and enjoy the park. Within the period of my lunch break the plan was finalized, that night I purchased a permit for two nights of camping at a whopping ten dollars and began rounding up fellow riders. 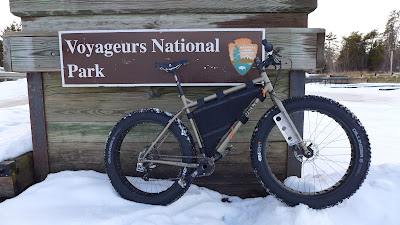 What started as a possibility of eight riders, dwindled to three for the final tally. It would be ArcFlash, EP from Duluth, and myself riding where no fat-biker has ridden before (I'm pretty sure about that). The route was nothing huge or extremely hard, but it would be very remote, have the potential for extreme cold and may also be a difficult slog in deep snow. Distance was more of an estimate based on the snowmobile maps, but I thought 25-30 miles each day, the first two days and 12-15 the last would be doable no matter what. Two island campsites were chosen to correspond, one on Channel Island site R100 and Fish Camp Island R13. We set off at the Ash River Visitor Center in a clockwise direction. The planned route would have us cross Lake Kabetogema in a northwesterly direction, travel overland north to  Black Bay, head further northwest to Rainy Lake,crossing it in a southeasterly direction to Kettle Falls, more overland crossings south to Namakan Lake, and finally west to our start point. As a bonus we made use of the two ice roads totaling about 15 miles, the first one starting at our launch point and taking us all the way to the Kabetogema visitor center, approximately 11 miles. 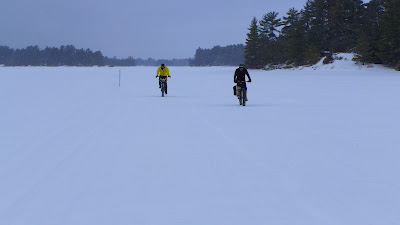 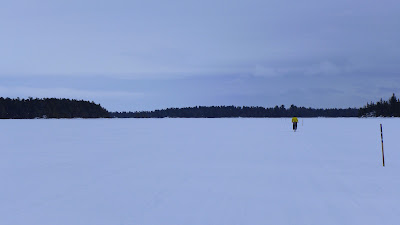 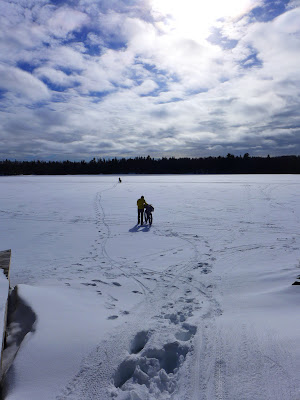 Day one was a dream, it was around 40 degrees, full sun and a very light breeze. None of us wore hats or gloves and rode with our jackets unzipped. The second ice road started at the Rainy Lake visitor,our site on Channel Island was only a couple miles away and a few hundred yards from the road.  We made very good time and arrived at camp so early we had time to explore, we utilized the road to head back to the visitor center,look around and drink some free hot chocolate. Heading back to camp,things changed......the wind shifted and the temps dropped. Our campsite faced directly into the wind with nothing for shelter. We built a fire, cooked and endured wind as long as we could. By 7pm we all retreated to our sleeping bags. Against my better judgement I brought a bivy sac..I hate bivy sacs. Instead, I slept half way into a bear locker that had it's opening flush with the ground. It gave me an awesome shelter from the wind as well as dampening the noise of it howling across the lake. When morning came the wind was still blowing, this put a little bit of a damper on the fun factor but there wasn't much we could do except get fed, packed, and rolling. 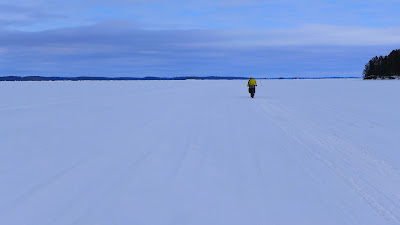 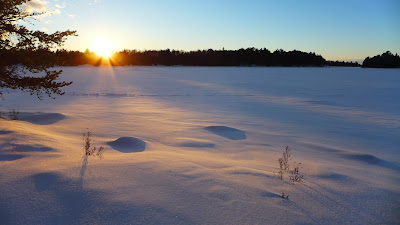 Day two, crossing Rainy Lake was awesome, and was what I was looking forward to most on the trip. It's an impressive body of water with the look and feel of the boundary waters on a larger scale...as it should since the BWCA is just to the east and shares a boundary.  The ride started cold and cloudy with a bit of falling snow. The ice road ended soon and gave way to hard packed snowmobile trail, it's way marked by colored wooden stakes placed about every tenth mile. By mid-day the sun began to peak from the clouds, signaling us to pit stop on a nearby island and cook some lunch. We arrived at camp a little later this time, around 4pm. As luck would have it the wind shifted again, this time with a lot more bite, seemingly coming across 30 miles of open ice directly into our west facing campsite.  We oped to shelter on the east side of the island and stay out of the wind as much as possible. It was pretty comfortable, each one of us digging, and packing a body shaped hole in the snow to set up or sleeping gear. We stayed up a couple hours later that night, turning in around 9pm. I wore everything I had that night,preparing for a much colder evening than I had anticipated or planned for. I decided to forgo the bivy, because I hate them and they always make your bag wet. My bag was already holding moisture from the night before and made a nice crunching noise as I unpacked it from it's stuff sack.  I used the bivy as a tarp for my boots and other random stuff I had laying around....which turned out to be a wise choice since it snowed that night.  I slept well for the first few hours and woke about every hour after that until morning, typical for me.


Still screened from the wind that was much stronger than the previous day, we leisurely cooked and ate breakfast, packing up and moving out around 11am. Upon riding out into the wind from our sheltered nest, it was apparent the forecast we were counting on was no where near that of which we were experiencing. On route, what started as crosswind would become a full blown, in your face, 28-30 below wind chill, head wind, the worst of which came in several bays on Namakan Lake. It wasn't all bad, the sun was shinning brightly and when we had the protection of the woods during the overland portages it was an enjoyable ride. We took a short detour to visit Kettle Falls, a remote outpost of sorts, complete with a hotel, and restaurant,as well as the dam known as Kettle falls,  too bad it's only open in the summer. From the falls we pushed on to our exit at Ash River visitor center battling the nasty head wind and warming up a bit where we could. We rode into the parking lot around 2:30 pm ,covering 80 miles of  lake ice and overland portages. Although not a massive undertaking, I had a fantastic time riding with two great companions on a new fat-bike route into the unknown...................next year it'll be bigger.