Somewhere in northern Minnesota sits a very small off grid cabin. It was built by and owned by my Dad. I've spent a decent amount of time there over the years and since his passing I wanted to keep the place alive and use it as much as possible. I was at the cabin doing some maintenance in early November just before deer opener. I almost always have a my bike with me and thought it would be good to ride since I got all my work done.  It turned into a dismal beat-down type of solo ride in the shittiest of conditions, 40 miles, off and on rain with temps no more than 50deg F. It was then that I came up with a plan to do an outpost ride in the winter when it usually doesn't rain.  Due to size constraints, 4 would be the max number of participants, 3 of us went. The week before the ride I stocked the building with food in a cooler and placed water jugs in plastic bins for when they may crack open from freezing, as well as a deep cycle battery for lighting.  On Friday night after work the three of us parked about 20 miles out for the ride in on the Soo Line Trail. The trail conditions were very good in the beginning and deteriorated as we went.

The difficulty of the ride had the perfect effect of being relieved to reach the cabin as a point of salvation. It took a while  to get the cabin warmed up, we ate, we bullshitted, but no one wanted to go outside and have a fire. The next day just happened to be Global Fat-Bike Day, we had fat bikes and we rode them most of the day. Our ride started with us back on the Soo Line and would also include a bunch of gravel roads. Our mid way lunch stop was at Pour Louie's  in Mc Grath. The ride wasn't especially difficult but the cold and the extra effort to keep a fat bike rolling in snow has a way of wearing you down. 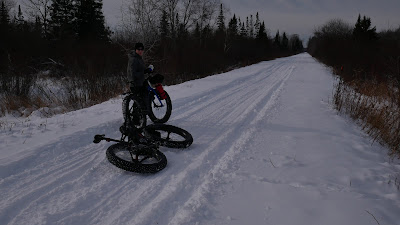 Once inside, the wet layers of clothes come off, the warmth of the room sets in and the last thing you want to think about is the 2-3 hours you still have to ride to get your ass back to the actual end of the ride. This can be overcome by chugging 3-4 mountain dews, maybe a red bull just to make sure, and two full entrees.... and some candy bars for the road. The massive calorie intake does help, but  the fact remains that there is only one way to get it done, get back on the bike and pedal. We arrived back at the cabin around dark and spent the evening eating and bullshitting, again no one wanted to go outside and have a fire. 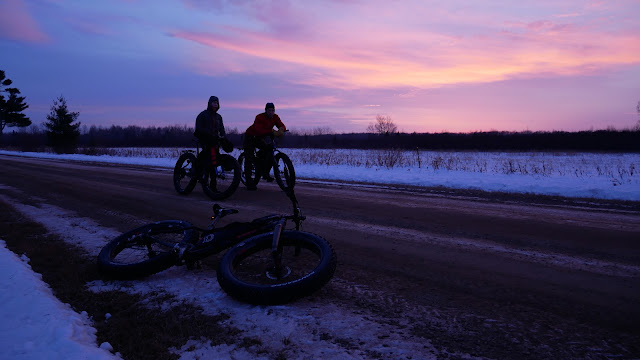 The ride Sunday, back to the vehicle was much better than the ride on Friday night, conditions got better as we went and it wasn't as cold. I had a great time with Boney and ArcFlash, it was somewhat like a winter bike-pack but we didn't have to carry all of the camping gear and only the food we immediately needed. This trip had me thinking of setting up some lesser outposts like a portable ice fishing hut with a stove or some type of heated fort like the Wreck.