I'm a firm believer in not letting an opportunity pass when I here it knock. This was the case for a mid-week adventure on Lake Mille Lacs in northern Minnesota. My dad was on the lake Saturday and showed me some pictures, the surface was a mixture of bare, two foot thick ,clear ice and patches of crusted shallow snow drifts. The time for a fat-bike ride across it's frozen surface was prime.


If your from here, you all have at least heard of the lake. If your not from here...Lake Mille Lacs is the second largest inland lake in the state. It's mostly round, not too deep, at an average of 20-30 feet, and is approximately 18 miles long, north to south, and 14 miles wide, east to west. I was interested in an 18 mile north to south fat-bike ride when I put the call out to any takers.  Three answered ,but only two would be able to make it, Best in Schow and Stumpy. Noticeably missing was ArcFlash, he is a master at reading ice and always a good guy to have along on an outing. The three of us met in Minneapolis, loaded gear and bikes into my van and headed north by 7am. With some minor rush-hour traffic and a pit stop for snacks and caffeine we were on our bikes by 10 am. We departed from the south end of the lake near Onamia, specifically from Cove Bay at the public boat launch. From there we rode north west 2.5-3 miles for tiny, Spirit Island, not much more than a very large pile of rocks. It was interesting none the less with  massive ice heaves seemingly taking it over. From the island Stumpy used his GPS to give us a bearing due north. The goal was to get right to the middle of the lake, as far from shore in any direction as possible, as well as ride the longest route across the frozen surface. 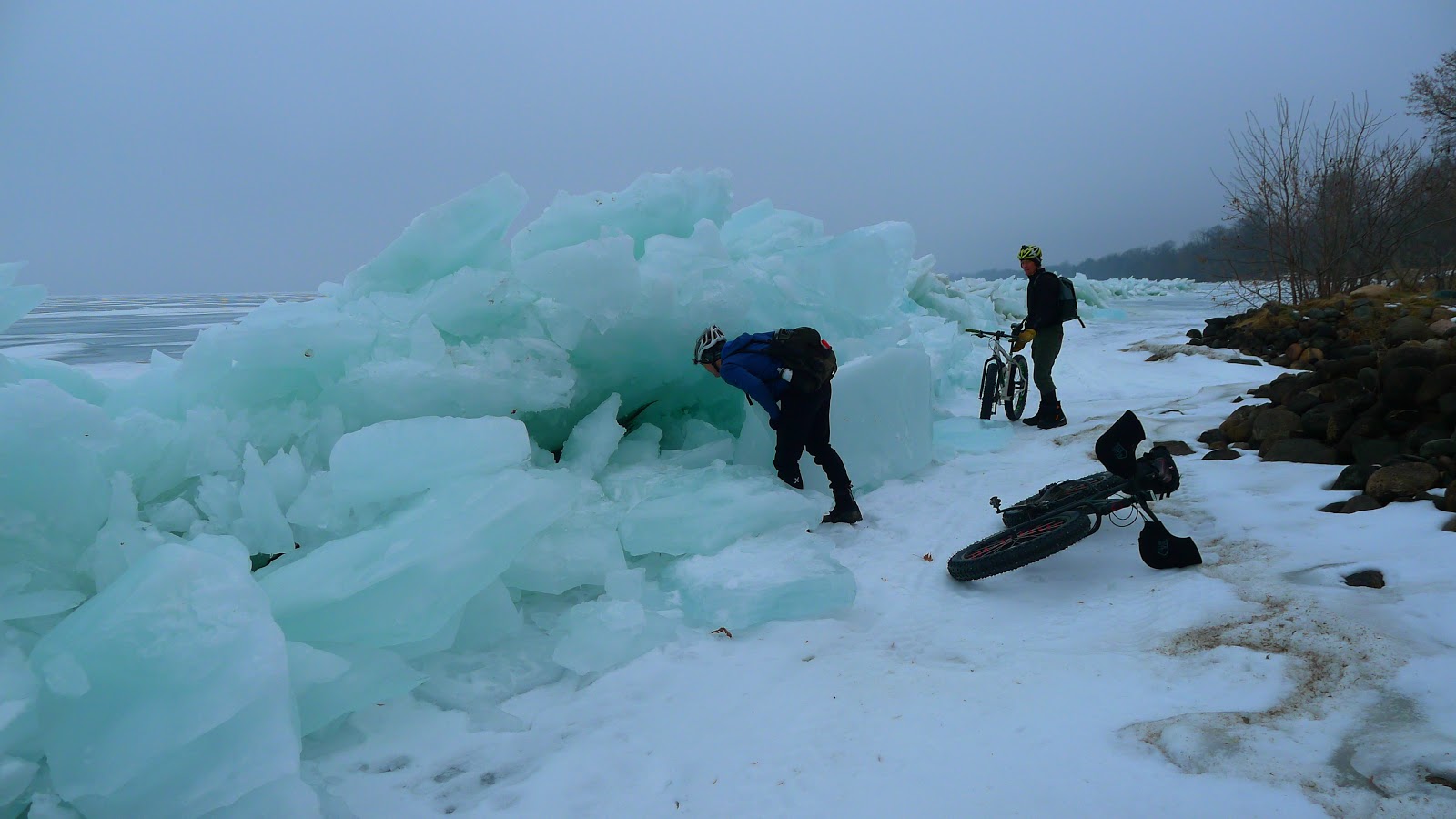 Stumpy and the GPS kept us right on track and it wasn't long, with the aid of a nice tailwind, that we were in the middle of the lake. It was a bit hazy and in any direction not a trace of land could be seen. The ride across to the north shore went smoothly and without much effort. For the most part the abundance ice fishing houses seemed to be within 3-5 miles of shoreline, the middle of the lake was void of anything but an occasional tire or snowmobile track. The desolation of the landscape was awe inspiring...there was simply nothing there but ice, snow, and biting wind.  Before setting out I thought back to stories I had heard over the years of dangerous pressure ridges and open water even on the coldest days of winter.....this made me a little nervous. We crossed only one ridge on our trek north, it wasn't bad and presented it's self right away, before we even reached Spirit Island. Our way back would be a very different story. Upon reaching the north shore, we poked around a little, hoping to locate a restaurant in Wealthwood. This didn't pan out so we rode southwest to Garrison. As soon as we took our new trajectory we encountered pressure ridges and had to be mindful to find spots that were safe to cross. The tail wind was now a nasty crosswind that was cutting right thorough my jacket, making for a cold ride. The going was a little slower and took quite a bit more effort....... we were still having a great time. 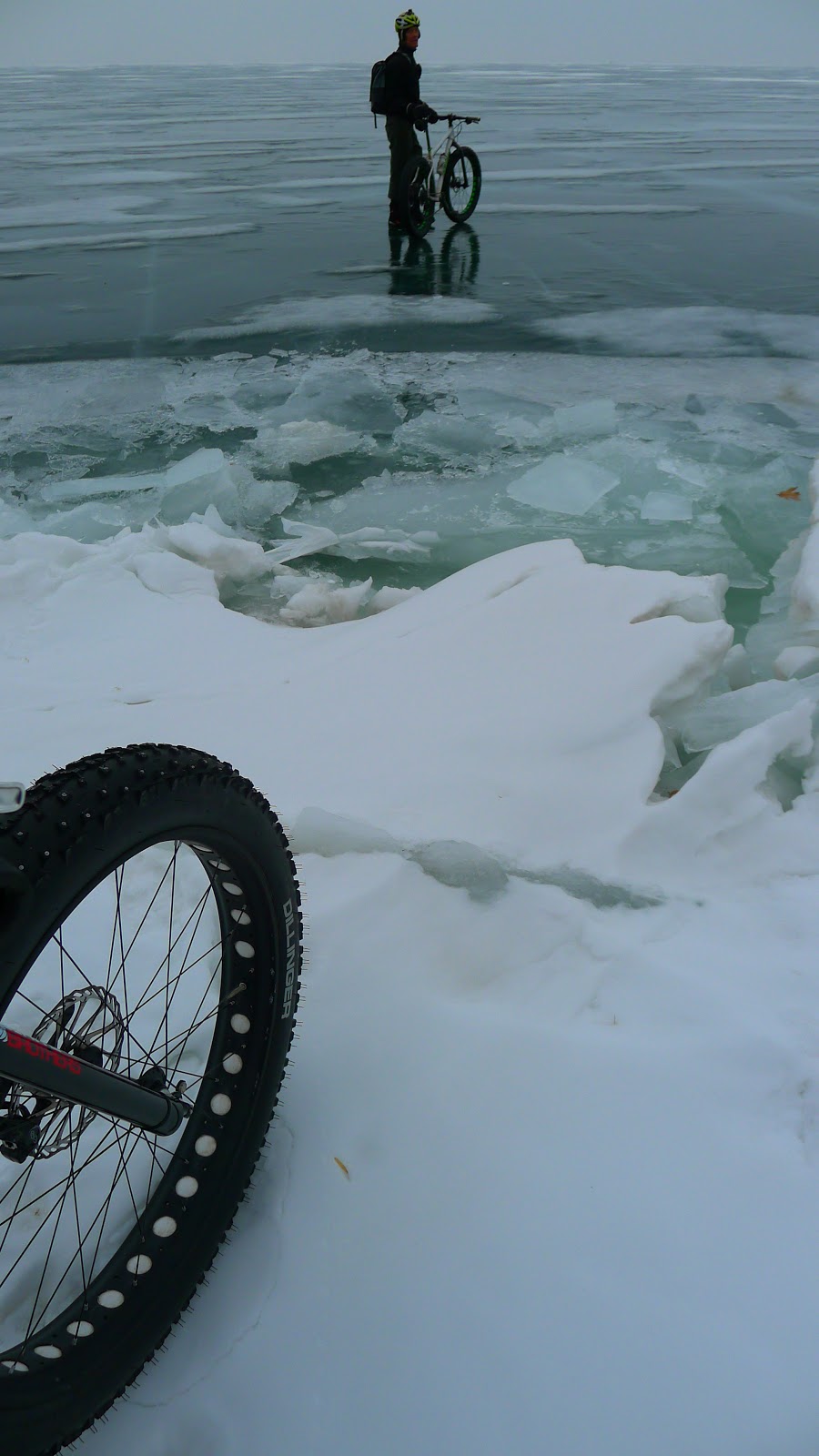 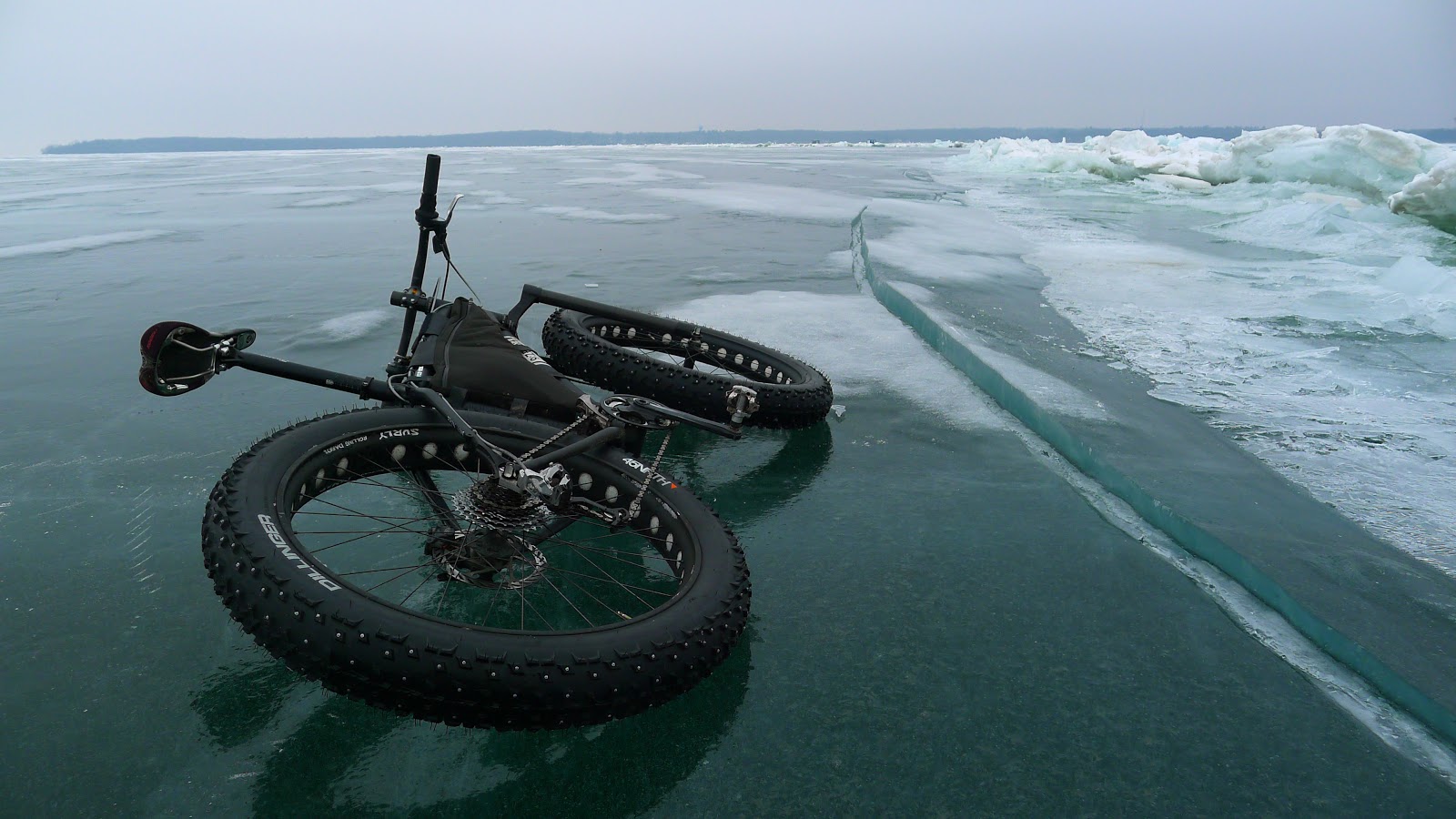 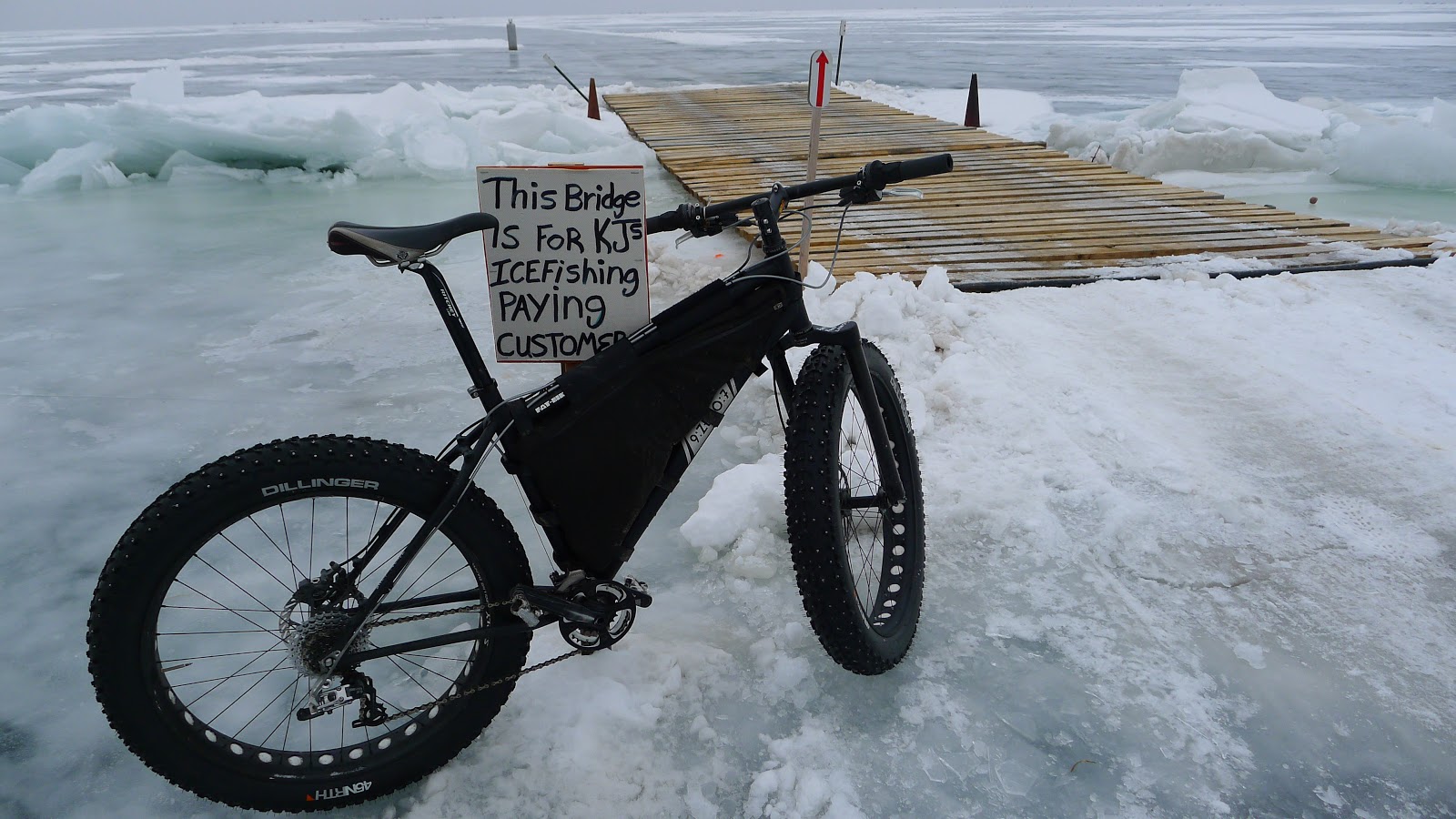 In Garrison, we rode for the first decent looking bar/grill we could see from the lake, the Y Club. Thoroughly warmed and fed, we left Garrison at 2 pm and peddled into the wind. It took another two and a half hours to get back, following the curved shoreline of a round lake is obviously longer than a straight shot down the middle. We were also confronted with a dozen or more pressure ridges that demanded careful attention and some scouting for a safe crossing. A few of them had a good "pucker" factor if you know what I mean. At one point I thought Best in Schow was going in as he tested the thickness of the ice on the back side of the ridge. I also found myself briefly riding across clear green ice that was cracking under my weight, Stumpy was right behind me and was going fast enough that all I had time for was to yell "ride fast". Neither of us looked back, we kept motoring and put it out of our heads. Gradually the pressure ridges became easier to cross and less frequent. Soon we were back at our vehicle delighted with our accomplishment, happy to be on land, and thoroughly tired out...... now we just need a bigger lake.