Last weekend I met up with J Has to do a short overnight camp-out at The Wreck. Since I finished it a few weeks back I've been excited to stay in it but just couldn't find the time. Ideally I wanted to get my kids out there and have a dinner in it, as sort of a christening....that hasn't happened yet.


When the opportunity for a camp-out came up last Saturday I jumped at it. We met up about five miles from our destination so we could at least get some riding in before we were going to sit around for hours eating, stoking the fire, and bullshitting. This was the first time we've actually hung out. I know him through his blog and have met just a few other times. He's a good guy, fun to hang out with and I wasn't ax murdered while I slept so that's good enough for me. I did have him sleep outside The Wreck due to lack of space.


The Wreck is only big enough for an adult and a kid, or maybe two adults that are really friendly. He knew beforehand he would be outside and chose to sleep in his bivy sac. It was a restless night for the both of us. The Wreck is sitting at an angle in which I found myself sliding to the front of the car. Also there were several mice inside that were eating all of our food crumbs and chewing on the wrappers making a lot of noise. Outside, J Has was sleeping at a bit of an angle that kept him fighting to stay on his sleeping mat. As all bivy sac's do, the inside was soaking wet by morning. A terrible night's sleep is well worth waking up in a cool location.


As soon as I got up I got the fire going and J Has came inside to warm up. Once the interior was nice and warm we both made some breakfast and began packing our gear for the ride back to our vehicles. I tidied the place and we were off. The ride went well, but we both would have enjoyed riding longer. We had a little fresh snow, it was relatively warm and neither of us had any place to be for the day. Next time I'll ride a little further before checking in to my deluxe accommodations. 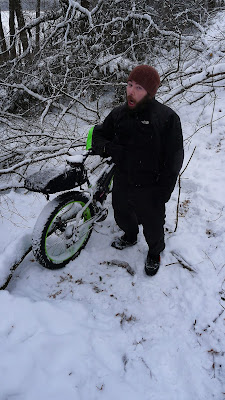