The Law of Attraction

Some say adventure only happens when things don't go as planned. The two days A.F., Young Tim, O'Neil and myself, spent in Arizona were definitely an adventure. My initial plan was simple, packraft the Colorado River just below Glen Canyon Dam in Page Arizona, to Lee's Ferry and ride pre-placed bikes back to the start point. Things got interesting about a week before we left for the Super Utah Trip. I was doing some final checking of the maps on Google to get road mileage for the bike shuttle I had planned. Instead of the forty + miles I had laid out, Google maps kept coming back with 151 miles. WTF?

After a little digging I found out the road we needed to ride on experienced a landslide, tectonic plate in nature, and would not be opened for several years. Frustrated and angry at the 151 mile detour, I was bound to make this trip happen and began pouring over my maps, and Google Earth, I also made several phone calls. All but one of the phone calls was useful, a very friendly and knowledgeable guy from the BLM had some encouraging words and was able to get me the map that I needed. Things were looking up, all I had to do now was convince myself we could find a little, to not at all used, Dominguez Pass Trail and do a 4-6 mile cross country hike through the desert to find our bikes or van somewhere in the outskirts of Page AZ.
Getting the bikes set-up in a spot in which they would be useful (less walking ,more riding) the next day ended up taking a good portion of the first day. The roads were super sandy, unmarked, and confusing as to which direction they might actually go. With much luck, map reading skills, and intuition, we placed them behind some rocks along a road we were hoping to intersect the next day. The roads were so sandy we walked approximately 7 miles round trip. O'Neil's Fat-Bike was no match for the soft, loose sand, the rest of us didn't even bother with our skinny 29+ and standard 29 tires and just put our heads down and shuffled along. On the other hand it was nice walking back to the van from the drop point without pushing a bike, it was also warm and sunny and beats the hell out of a good day at work.

Another big part of the route was the use of the Ropes Trail to access the river below the dam. I had stumbled upon this little gem in a guide book. I wasn't sure if the route still existed based on the copyright date, and the proximity to power-plant/ dam/ post 9-11, but confirmation via the internet of a guy who had done it about 3-4 years ago was promising. The guide book also had the name of it wrong, somehow it all worked out. As an alternate way to raft/float/paddle the river, a guide service will take you up river from Lee's Ferry and drop you and your boat off near the dam so you can float down. I wasn't having any of that. If I was going to marvel at the 1000' + walls of Glen Canyon for the first time it would not be from a power boat. For me to connect with something really awesome it needs to be under my own power and on my terms. 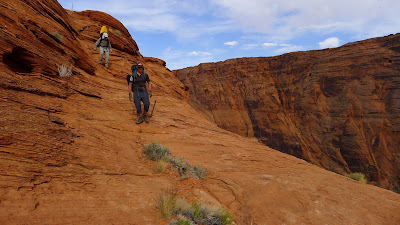 The Ropes Trail was a little tricky to find, but as soon as we found the first pipe sticking out of the ground we were confident. The trail gets it's name from the cables used between the cemented pipes, making the down climb a little safer. I won't bore you with the history of the trail but only two cables still exist on the final  175-200' drop to the water. They are definitely the most essential since it's not much more than a big slab that gradually gets steeper towards the bottom. A good pair of gloves is also handy as much of the cable is frayed and sharp.
.
With the bikes set-up, and the Ropes Trail out of the way we were finally on the river with about 2-3 hours of daylight to spare. We were all giddy like a bunch of schools girls when we pushed off. The river was cold, swift, and very clear. The shear red rock walls were all around us and being lit by the setting sun, my vision was now reality. Between short bursts of paddle strokes, I let the will of current take the raft as sat in silent amazement, spinning in slow circles.

About 8 miles down stream we set up camp. I didn't know it then but we were right in the middle of Horse Shoe Bend, an iconic oxbow in the river from which many a photographer has snapped pictures of,  from the rim above us.   Horse Shoe Bend was also the inspiration for this entire endeavor in Glen Canyon..........     .......explanation .........The Law of Attraction.      We made dinner before dark and had some time to relax. It was warm that night and I slept well.